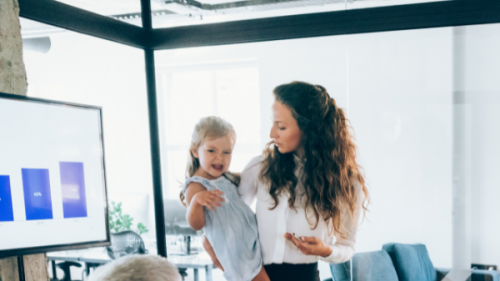 With inflation hitting a 40-year high of 9% in the UK this year, parental leave is looking less affordable for many families. Statutory maternity pay has already been raised, but there’s little chance it will keep pace with rampant inflation.

The British Chambers of Commerce also warns of a “real chance” of recession in the UK later this year–and in times of economic pressure, employees on maternity leave are disproportionately likely to be made redundant.

A recent study by Maternity Action shows most new mothers go back to work as soon as their 39 weeks of statutory paid maternity leave are over, with just 45% taking extra leave. The rising cost of living and fear for their jobs may drive many employees to take less parental leave–but rising childcare costs may force others to take more, especially lower earners and isolated single parents.

Statutory maternity pay can be claimed for a maximum of 39 weeks, with the first six weeks being paid at 90% of the worker’s average weekly pre-tax earnings and the other 33 weeks at £156.66, or 90% of their average weekly earnings, whichever is lower.

Partners have the option of splitting this time and money to create shared parental leave. Otherwise, the partner is entitled to up to two weeks’ paternity leave, again at £156.66 or 90% of their average weekly earnings, whichever is lower.

Tax and national insurance payments are also deducted from this, leaving many parents short of money after the first six weeks.

While employment rights are officially protected during maternity leave, the Equality and Human Rights Commission estimated that 30,000 women a year were losing their jobs as a result of pregnancy even before the current economic downturn–and in the 2008 recession, the Alliance Against Pregnancy Discrimination reported a massive increase in workers being made redundant while pregnant or on maternity leave.

Those employees might have grounds to claim discriminatory dismissal–but for many, the practical and emotional turmoil around having a baby, and the short time limit to bring action, make it all but impossible.

Now more than ever, new parents are looking for more flexible approaches to work, according to recent research by Fertility Families.

?      45% of employees want their employers to offer remote options and flexible hours to parents returning from leave.

?      22% want their employers to raise maternity and paternity pay.

These changes would reduce the financial burden of the cost-of-living crisis on families and allow parents to work around childcare.

All employees with 26 weeks’ service now have the right to apply for flexible working, but many employers are struggling to balance the competing demands of different applicants and may not have the budget to set up more home offices during an economic downturn. However, there are proposals for new legislation on flexible working, potentially making it a right from day one–and the downturn may actually encourage employers to offer reduced hours.

We must hope that the creativity, flexibility and goodwill companies showed during the pandemic emerge again to help parents and families through this new challenge.