ONE IN FOUR UK WORKERS PLAN TO JOIN THE 'GREAT RESIGNATION' 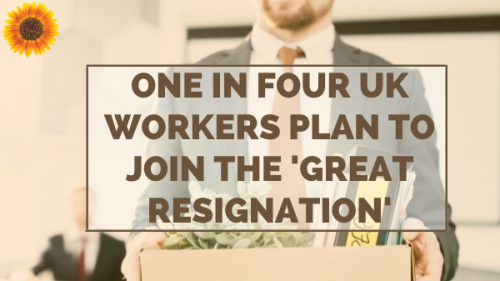 Nearly a quarter of workers plan to resign in the next few months during a “great resignation” prompted by COVID burnout, says a new survey by Randstad.

The survey of 6,000 workers found 69% of them felt confident about changing jobs in the next few months, with 24% actively planning to switch within three to six months. Normally just 11% of workers change jobs in a full year.

The cost of this “Great Resignation” to employers could hit £25,000 per worker, and companies need to consider improving pay and working conditions to retain their top talent.

Some of the new jobseekers are people who stayed in jobs they were unhappy with during the uncertainty of the pandemic and would normally have left already. Another contributing factor is burnout and the rethinking of priorities many people have gone through during COVID.

Only 16% of workers say they’re worried about trying to get a new job, according to the survey, with manufacturing workers being the most confident of finding a new opportunity, followed by construction, tech and logistics.

Workers currently employed in construction, tech and logistics were all confident they would find new opportunities, with workers in manufacturing being the most confident.

Research by Oxford Economics has found that new hires in professional roles take an average of 28 weeks to reach optimum productivity, costing businesses on average £25,000 per employee.

Talent shortages in some industries have led companies to offer hefty signing-on bonuses to attract recruits, up to £10,000 in some cases, though many have no plans to increase wages. And Lloyds Bank Business Barometer reports that 48% of businesses are finding hiring easier now the furlough scheme has ended, with 43% expecting a 2% rose in average pay in the next year.

Lloyds said overall business confidence in October had reached its second highest peak since March 2020, and that the worst of the staff shortages in some sectors might be over.

“With 60% of firms saying that they expect to bring all their furloughed staff back to work, and a further 30% intending to bring back more than half,” said senior economist Hann-Ju Ho at Lloyds, “it should bode well for the labour market as we head into the winter.”