How KFC is paving the way for a more inclusive work place. 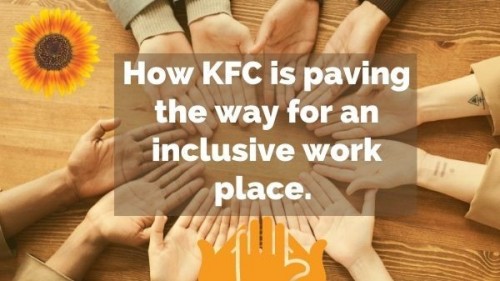 KFC has emerged from the challenges of 2020 as a leader in the field of inclusion.

The double shock of COVID and the murder of George Floyd drove many businesses to take a long hard look at their company culture, and the iconic fast-food chain was no exception.

Chief People Officer Neil Piper described the situation as a “catalyst” to listen to employees, find out what inclusion and belonging really meant to them, and take action to achieve it.

“It felt as though we were all put in a cage. There was a pivot in the world of work, and we needed to think about how we set people up at an individual level that makes them feel safe, particularly when many of them felt set adrift,” he said. “Our strength is our culture, but having an engaging culture doesn’t always mean it’s inclusive.”

KFC took a ‘Listen – learn – act – amplify’ approach to rethinking its diversity and inclusion strategy. After interviewing employees early on in lockdown about what kind of support they wanted going forward, it used the data to create personas to give a clearer picture of the needs of different employee groups.

“A lot of people on the leadership team had similar living environments so it was easy to assume everyone was in the same boat,” said Piper. “But some of our employees were feeling trapped, sometimes living, sleeping and working in one bedroom. Or they were in a dual worker household with their kids at home. We spent a long time listening to the colour around people’s experiences.”

A key finding was that parents wanted more flexibility, not only during lockdown but for the future. KFC responded by creating a new suite of parental benefits that offers every employee, from head office to restaurant staff, six months of parental, shared parental or adoption leave at full pay.

“The employee proposition is very different at head office compared to restaurants,” said Piper, “and having this benefit soon became the talk of the town.” Recruitment at KFC has seen a boost as workers at competitor chains are attracted by the policy.

The company also took a stand for work-life balance during lockdown by encouraging leaders to “leave loudly” when they needed to leave early, so more junior staff felt empowered to do so. “There’s a ripple effect that’s not inclusive if you say one thing and leaders are doing the opposite, organising 7pm quizzes or not taking time off as a badge of honour,” said Piper.

Employee affinity groups have taken on a key role in ensuring KFC makes employees of all backgrounds feel that they belong. “These had been more informal in the past but there’s now a dual-lane commitment to policy, commitments and action as well as a key role in the company’s engagement agenda,” Piper explained. “There’s a halo effect for the organisation in terms of inclusion whether you’re in a group or an ally – it all feels good.”

Managers at KFC have been using Include, a listening tool by Peakon, to embed inclusion into their work, such as by using blind recruitment processes or asking agencies for more diverse shortlists of candidates. The platform also promotes understanding of concepts such as privilege, neurodiversity and conscious inclusion.

Piper believes the company’s proactive commitment to inclusion during COVID has paid dividends in terms of loyalty and staff retention, protecting KFC from some of the impacts of the ‘great resignation’ and the current skills shortages.

“Helping employees to understand potential career paths both in and outside the company – perhaps counterintuitively – is a useful retention tool. Our role is to be meaning makers, because that’s how we get the best from employees while they’re here,” he said.

“We’ve not felt the great resignation in a damaging way because we’ve had conversations early on with key talent. People don’t assume their job is the same as it was before, and know they can find satisfaction.”