What to do when you receive an employee grievance 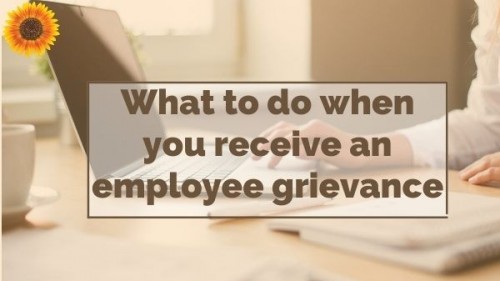 So you’ve received a grievance. What’s the first thing you should do?

The answer is not to set up a grievance meeting. That’s a knee-jerk reaction. First, you need to know your case – find out exactly what they’re dealing with.

When a employee submits a letter of grievance, it’s often an emotional rant telling you exactly what they’re unhappy about. So the first thing you should do is to send them a response that reflects back whatever they’re complaining about – but summarise their complaints into a numbered list.

Next, ask what supporting evidence they have in relation to these complaints. That would mean copies of any documents, emails, texts, WhatsApp messages, recordings, or anything at all that supports them, including details of witnesses: what was said, who was there when they said it, and how the person felt. The more details the better. Grievances are not a game of poker. It’s really important to know exactly what you’re dealing with before you just jump in. Seek to understand before you seek to be understood.

Once you have the list of complaints and the supporting evidence, then tell the employee that you’re going to set up a grievance hearing, and explain to them how it will work, that somebody will be chairing it, that they will have the right to be accompanied, and so forth.

How do employers make decisions lawfully if they receive a grievance? Most people understand that in criminal courts, the burden of proof is “beyond reasonable doubt”. In employment law, it’s “on a balance of probabilities”, which means what does the evidence suggest has happened? It’s a 51% rule.

What that means is this: most employees will come with a grievance that’s quite emotionally charged: they’re unhappy with the situation at work, they perhaps feel they’ve been bullied or discriminated against. The way the law looks at it, it isn’t about what has or hasn’t happened, it’s about what the evidence suggests has happened.

So while the employee might feel that they’re bang to rights about the treatment that they’ve received, the employer’s obligation is to carry out a reasonable investigation – that means talking to witnesses, looking at documents or whatever other evidence you have, and then forming a decision based on the evidence of what the situation looks like.

This means not “what is the truth?” necessarily, but “what does the evidence suggest has happened?” That’s a difficult thing for a lot of employers and employees to get their head around.

Employers should be looking for solutions for any grievance at the beginning, not just at the end. This might save a lot of time, a lot of money, and a lot of hassle. So when you are asking the employee for full details of the evidence in support of their grievance, you should also be asking what is the outcome they’re looking for? At least this sets the parameters of the situation clearly in mind, and also can determine what the potential legal liability is.

This doesn’t mean you have to give them the outcome they’re looking for, but it might be something that will allow you to shortcut the process early on. Or maybe it allows for settlement talks early on. Compromise is the cheapest lawyer. Whatever it is, always be looking for solutions.

If you can’t achieve a solution that’s agreeable with the employee at the outset, then go through with the grievance process, make a decision based on a balance of probabilities, and confirm the outcome. But then understand that you still need to establish how the employee will come back to work – because, as you can probably imagine, an employee who raises a grievance unsuccessfully will probably find it quite awkward to come back to the workplace.

So it’s about understanding how that person is facilitated back to work. How are the rules of engagement put in place so that we can get back to some normality? There are lots of different methods you can use to accomplish this.

To find out more, click here to join our webinar: